This blog is dedicated to the thousands of Mummies and Daddies out there who have to do the unthinkable…bury their child. I write these words with a heavy heart that is bursting with love for a part of me that will be forever missing.

As I continue my journey into the extensive and somewhat hidden loss community I realise that many bereaved parents are unsure whether they should have a formal goodbye for their baby or not. I’m hoping that my experience of saying goodbye, as painful as it was, might help other parents make the impossible decision of how they will say goodbye to their baby.

When Benjamin died we didn’t know what to do. Do they even have funerals for babies who have been born sleeping? Would we bury or cremate him? Where would we do all of this? If we buried him in Perth and moved in the future, how could we leave him behind? Could we get him christened first? All these questions, less than 24 hours after finding out that he had died, were overwhelming to say the least.

The hospital chaplain gave us some information and answered our questions the best that he could. We could not get Benjamin christened but they could organise a memorial service. I was disappointed that we couldn’t christen Benjamin. “Christening is only for the living,” I was told. It felt like my baby’s life, as short as it was, wasn’t worth as much as a baby who lived. This is a feeling I would have to get used to.

We decided to organise Benjamin’s goodbye ourselves. It didn’t feel right that someone else would organise our son’s funeral. This would be the only opportunity we would have to do something officially as Benjamin’s parents before the label of “parents” would disappear. Merv rang the funeral home and got the wheels in motion.

The day after I was released from hospital we visited the funeral home to finalise some of the details. Sitting in the funeral director’s office discussing the details of my son’s funeral was surreal to say the least. I couldn’t believe that this was happening. They were kind and patient but nothing took away from the reality that we were facing. I managed to hold it somewhat together until we had to choose Benjamin’s coffin. How cruel is this world that parents should have to choose a coffin for their newborn baby? It was unbearable.

We left the funeral home and went to buy an outfit for Benjamin, his one and only outfit. Going into the baby store was like a cruel torture. Everyone else in there was so full of hope and excitement; the colour of the teddy bear that they were buying was their biggest stress for the day. Picking the outfit was hard. We didn’t quite know what would fit him and we didn’t want to get it wrong. We finally went with a beautiful baby blue playsuit with white polka dots and a matching hat and blanket. Before leaving the store I wanted to buy a little keepsake to leave with Benjamin in his coffin so that he wasn’t alone. A small blue rattle with a bunny on top jumped out at me immediately but it was all too much. I completely broke down. I started wailing uncontrollably in the store. How could this be happening? I was meant to be keeping Benjamin safe, not a little bunny. He wasn’t supposed to be leaving me. He was supposed to be with me forever. Merv grabbed the bunny from me, paid and we ran out of the store.

The days before the funeral are still a blur. We choose music and readings and poems. We met with the priest. We organised food and drink for after the funeral. We sent out details of the day to our very close friends. Benjamin’s grandparents flew in from Ireland. We were surrounded by people, but never felt so alone.

The last thing to arrange was the flowers. As Benjamin’s coffin was so tiny the funeral home’s usual arrangements were too big. I went to the florist with my mum to choose the flowers for on top of Benjamin’s coffin. I went up to the counter to ask for help. “I need flowers for my son’s funeral,” I whispered. The look of horror and pity on the florist’s face was hard to disguise. “His coffin is very tiny,” was all I was able to get out before I broke down again. It felt like life had turned into a very cruel joke and the joke was on me.

Wednesday, 26th April 2017 – the day of my son’s funeral. The sky was perfectly clear with blistering sunshine. We arrived at the funeral home to spend some time with Benjamin before the service. As we walked in through the doors I will never forget the little white coffin sitting at the end of the chapel. I walked up with trepidation and fear for I knew my little Benjamin would be resting within it. I couldn’t breath. The tears ran down my face, silent and free. This was it, the last goodbye.

For the next hour we got to introduce our boy to some of our closest friends and family who were able to make it to Perth. We introduced Benjamin to them with such pride, the same pride that any parent feels for their child. No one looked at him with horror, only with love and amazement. There was only love in that room, love for a boy who was so desperately wanted and would be so desperately missed.

Time had moved so slowly for us since Benjamin had died. Every minute ticked past like it was an hour. But that afternoon was different. It was as if someone knew that we never wanted it to end, that we never wanted to say goodbye. As I held Benjamin in my arms for the last time I knew that the inevitable was coming. Merv came over to me. “It’s time,” he said. There is no other person in the world that I could have handed Benjamin over to in that moment. I knew that his Daddy would keep him safe. Merv gently lifted him from my arms and placed him in his coffin. I gave Benjamin one last kiss and left him with his bunny and a letter from his Mummy. The coffin was sealed. Merv carried our son to the car alongside his brother, his father and his father-in-law. Our boy was finally on his way to rest in peace.

They say the hardest thing to do in life is bury your child. I struggle to see what could be harder. The pain of the day was balanced out by the honour that we bestowed upon Benjamin and his short life. It was balanced out by the love that so many across the world have for our little boy. We got to say goodbye in our way and remember him in our way and that is surely something that every bereaved parent deserves. 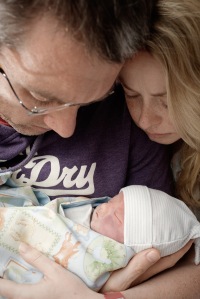 5 thoughts on “The hardest goodbye”