As I settle into another solo flight to Sydney my mind can’t help but wander back to the last time I was making the trek across the Nullarbor on my own. It was 4 months after Benjamin was born, a very fragile and anxious time for me. I was having anxiety at the thought of going to the shops let alone making a 35-hour solo trip to visit my sisters in America. Looking back now, the trip really could have gone one of two ways – me having a complete breakdown or it helping me to re-integrate back into life. Luckily for everyone involved it turned out to be the latter.

As I stepped off the plane at LAX I was nothing short of petrified. My anxiety levels were so high it felt a little like an out of body experience, like I was watching someone else do it all. Going through American immigration is intimidating at the best of times but this time I had convinced myself that they weren’t going to let me through. I don’t know whether the waiting hall was particularly hot or whether it was just my anxiety but either way I was feeling it. As the officials barked orders at me I felt confused and was on the verge of crying. I couldn’t hear them properly and I wasn’t sure what they wanted me to do. It seemed like at every turn they were shouting at me. In my child-like state I somehow managed to make it through. I got to the gate for my connecting flight to Seattle and took a deep breath out. As I sat there waiting my mind was panicked with how I was going to cope. I had just conceived the idea of The Anxiety Project and yet there I was with my levels higher than ever. This was my first test. I closed my eyes and gave in to the tears that had been threatening for the last few hours. I grabbed hold of my necklace with Benjamin’s little heart on it and kissed it gently. It might sound silly but I always believe that Benjamin will help give me the strength I need to pull through. Breathing slowly and deeply I managed to calm myself down. I plugged in my headphones and zoned out from the rest of the world. “I can do this”, I repeated to myself quietly. By the time I boarded my next flight the tears were dry, my heart was beating at a normal pace and I was ready to take on my next test.

Once with my sister I felt less exposed. She was in mothering overdrive, nestling me under her wing as if I was her third daughter. My two nieces were so excited to have their Aunty from Australia with them that they treated me as if I was a rock star. The adoration was exactly what I needed. We drove up to the national park the next day and it was like I was in heaven. The natural beauty of the Pacific Northwest is second to none. There is something about being surrounded by nature that is very soothing after experiencing a life-altering event. Every day I would drink in the surroundings. We hiked, went whale watching, hired a boat and went paddle boarding. It felt like I was feeding my soul.

I can’t pretend like the trip wasn’t hard. I had to relive the day that we lost Benjamin numerous times as I answered the questions that I knew my sisters would have. The tears flowed as heavily as ever.  As I looked at my nieces playing together my heart ached knowing that Benjamin would never play with any future siblings, that he would never meet all of his cousins, that he would never be like every other boy. My nieces were so curious about Benjamin; it took me a little by surprise. I guess they are still young enough not to be curtailed by the expectations and judgements of society. They asked open and honest questions about why he died and how they wished he was still here. I had no idea they would be so impacted by his loss, especially given the fact that they had never even seen me pregnant. I answered their questions patiently and showed them his beautiful picture book. I told them how much I miss him too and that it was ok to miss him and still talk about him, that Benjamin would always be their cousin. By me talking openly with them they in turn were able to just treat him as a normal part of the family. They weren’t scared or traumatised. To them he wasn’t a dead baby; he was just their cousin. 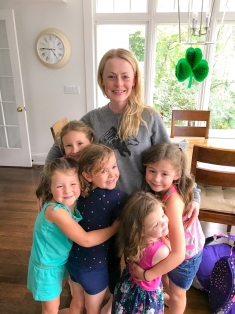 Being anxious and doing it anyway is not for everyone but it worked for me. It forced me out of the bunker of despair I had built for myself. It helped me to realise that I am stronger than I think and that I can live a happy life without Benjamin, as much as I don’t want to. Now when I am at the shops I don’t look down anymore. I engage in conversation and answer the dreaded questions when they come. Despite all of this I know that I haven’t yet won this battle with anxiety. Merv went for a run the other day and when he didn’t return at the time he had said I convinced myself that he had died of a heart attack on the side of the road. I got in the car and drove his route until I found him. He was walking along, happily chatting in the sun with his friend who had to pull up with a sore leg. I felt relieved and a little silly. On this occasion I had let anxiety get the better of me.

When you are so fragile it doesn’t take much to set you off. You make mountains out of molehills and challenges you previously welcomed now seem insurmountable. The next time anxiety starts to get the better of you I want you to remember something – the worst has already happened and you have survived. Give life a try. We are all stronger than we think.

* Some things that have helped me with my anxiety over the last 2 months: